Colostrum (also known as “first milk”) is a special type of milk mother mammals produce for their newborn just before giving birth. Mothers feed this milk to the newborn immediately following birth, and it is only available for a limited amount of time (typically around 3-4 days). Colostrum is densely packed with nutrients that protect and nourish the baby for the first few days of life.Since most species of mammals develop at different rates and have different nutritional requirements, the colostrum of each species has a different composition. We explain how human colostrum differs from cow (bovine) colostrum, and what you need to know about bovine colostrum supplements. 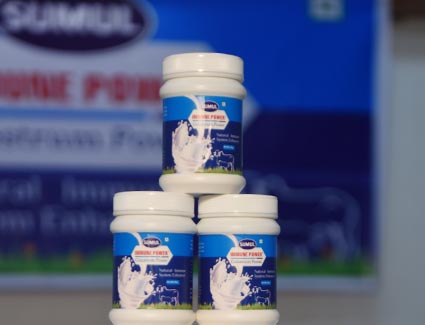 Bovine colostrum is a milky fluid that comes from the breasts of cows the first few days after giving birth, before true milk appears. It contains proteins, carbohydrates, fats, vitamins, minerals, and specific kinds of proteins called antibodies that fight disease-causing agents such as bacteria and viruses.

Human and bovine colostrum don’t just vary in lactose and casein concentrations, they also contain different immune molecules and growth factors. For example, an important component of the immune system is immunoglobulins also known as antibodies. Immunoglobulins protect against bacterial and viral infections. There are many types of immunoglobulins such as IgG-class and IgA-class. A human baby and a cow calf receive these immunoglobulins from their mother differently.

Immunoglobulins
In humans, the IgG-class antibodies are transferred from the mother's bloodstream via the placenta to the fetus. Therefore, IgG-class antibodies are not found in human colostrum. This provides some degree of temporary passive immunity to the newborn against possible infectious agents after birth. In contrast, the IgG-class antibodies are not transferred from the mother cow’s bloodstream across the placenta to the calf. Consequently, the calf is essentially defenseless when born unless it gets bovine colostrum.The predominant immunoglobulin in human colostrum is IgA-class. The IgA-class in human colostrum and milk has lactoferrin attached. This is believed to provide host defense against specific human pathogens. Lactoferrin also protects IgA antibodies from the effects of stomach acid and digestive enzymes

Lactoferrin help bolster your innate immunities, aka the body’s first line of defense against foreign invaders. Research has demonstrated antibacterial, antiviral, and antifungal properties; lactoferrin may help stimulate the white blood cells at the mucous membranes of the digestive tract and reduce the effects of certain bacteria. As a result, lactoferrin may play an important role in the development of beneficial intestinal flora (the microbiome) and the optimization of the immune system.