Our organization is aware regarding environment and committed to control pollution and protect environment. Since 2002, our organization certified with Environment Management System means ISO 14001:1996 has done modernization of the Environment Management System as per ISO 14001:2004 in May, 2096, further got renewed till 2014. In March 2014, as per ISO:14001:2004 re-evaluated and updated, at present, as per ISO:14001:2015 re-evaluated and got updated.

We have achieved notable targets regarding environment in every field. Natural sources like electricity & water were being used judiciously. We have obtained National Energy Conservation award 7 times for saving electricity & energy. In tree plantation aspects, 354 saplings of small and large trees plantation has been done. And, in the align with this 10,43,128 total nos. of tree plantations done by union at village level societies of Surat & Tapi district, in that global achievement union was contributed their role as a eco-friendly partner, by which this will brought enhancement in the climatic wealth, certainly. To make available good environment to the next generation, toward this the cooperation and involvement of all the friends is required. 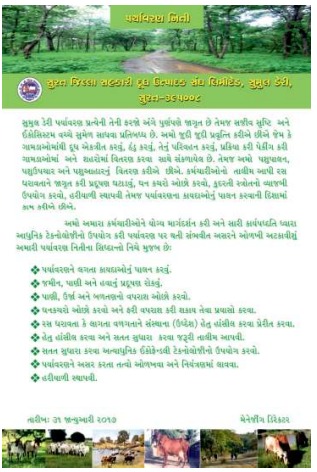