On 04/03/2018 25th Sumul healthy baby competition is been organized & celebrated its "Silver Jubilee in which 1638 babies participated.

With a Sumul healthy baby competition a blood donation camp also been organized with the help of civil hospital in which 126 men & women participated.

Healthy Baby Contest is unique contest of its kind in Surat. It is conducted each year since 1992 successfully. Its popularity is increasing day by day due to its methodology transparency and faith in Sumul dairy.

Please click on the year to view winners of year

It was commenced in 1992 with the motive to create health awareness among the baby and mothers, as this baby will be going to be future of nation. There is general feeling that fat is proportional to health but this not always true, the same also does not holds good for thin. Another objective was to establish a unbreakable relation between consumers and the organization and to develop its image as a socially responsible organization who do not believe only in selling goods but in customer care and satisfaction.

Sumul dairy publishes the result of contest in the leading local newspaper. The photographs of winner are also published in newspaper and prize distribution ceremony is shown in television network. A well-known personality of the city distributes the prize. The information for contest is announced through all leading newspaper of Surat City.

This contest is organized for the three groups made according to age. One group for 0 to 1 year, Second group for 1 to 3 years and the third group for 3 to 6 years. The applicant is required to submit the duly filled application within specified date. The precondition is that applicant must be user of Sumul Dairy Milk. At the time of Competition Sumul dairy manage gifts for each participant and breakfast, tea, coffee, milk etc for those who comes along with participants. An Autonomous Doctor panel from Civil Hospital Surat examines each candidate according to predecided rule and regulation.

The contest has two parts. 1st parts deals with Preliminary test like height, weight and vaccination. Those who qualify 1st part are informed with letter by hand delivery. In the second part, Children are examined in details. Based on this examination, results are given. In each group three baby (1st, 2nd and 3rd) are selected for prize distribution. One Sumul baby of the year is selected among 1st of each group.

Candidate at 1ST position of each group gets one packet (500ml) of pasteurised standardized milk daily for 300 days. . Apart from above each at 1st position gets gift cheque of Rs 501.00 and other attractive toys along with a certificate describing 1st position & good health.

Candidate at 2nd position of each group gets one packet (500ml) of pasteurised standardized milk daily for 250 days. Apart from above each at 2nd position gets gift cheque of Rs 251.00 and other attrctive toys along with a certificate describing 2nd position & good health. 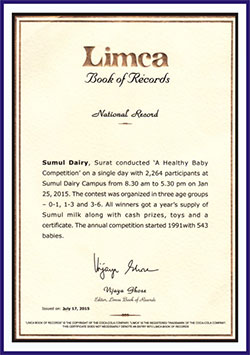